District series number plates have shire specific characters that can be issued to persons who reside within that district. 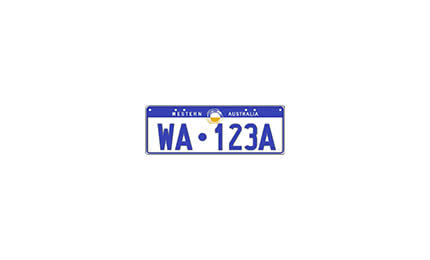 District series plates are manufactured in numerical sequence with a district identifier as a prefix.

The old style district plates were issued in black characters on either a white or yellow background. Plates are now issued on the blue and white 'Brand WA' format.

These plates can be issued to motor vehicles, trailers and motorcycles owned by persons who reside in that district.

All district series plates remain the property of the Director General. It is an offence under the Road Traffic (Vehicles) Act 2012 for a person to fail to return the number plates on demand.

District series plates can be remade in any of the below colour combinations:

At the time of surrendering, a person can request to have their district series plates retained at a Driver and Vehicle Services Centre or regional agent for re-issue on another vehicle. A plate fee will occur when re-issuing the plates onto another vehicle.

Please note that retained district series plates can only be re-issued onto a vehicle owned by the same person or to a member of the owner's immediate family upon completion of a State/district plate transfer; immediate family form.

District series plates will be destroyed unless a person requests for them to be retained at the time of surrendering.

Moving retained plates from one DVS centre to another

Please telephone the Driver and Vehicle Services contact centre on 13 11 56 to arrange this.

District series plates may be swapped in the following circumstances:

You can transfer your district series plates to an immediate family member (spouse, parent, child or sibling). A fee is applicable for this transaction (see Plate fees below).

See Sell or transfer plates on how to do this.

Fitting plates to your vehicle

Screws are not supplied with plates issued by DoT.

You will need to organise the removal of the old plates and attachment of the new plates yourself, or arrange for them to be fitted by a car dealership or garage.

You will need to purchase and affix an auxiliary plate if a bike rack or mobility device is attached to your vehicle and obstructs the view of your rear number plate. Refer to Auxiliary plates.