Find out about navigation aids including the types of marks, Cardinal marks, leads, lights and the Coming in, Going out rule. You can also read about upgrades to the Swan Rivers navigational aids.

Navigation marks are the equivalent of road signs on highways. It is important to be aware of what is meant by the various marks.

Take time to study a chart as well as the buoyage (the system of buoys) to familiarise yourself with their meaning.

Coming in, going out rule 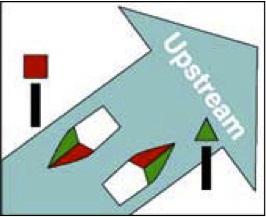 Tip: One way to remember this is the saying there's some red, port, left in the bottle when travelling upstream.

Lateral marks are not always placed in pairs where you simply have to pass between them. When you see just one, you will need to bear in mind the upstream-downstream principle.

Marks are used to show well established channels indicating the port (left) and starboard (right) hand side of channels.

We advise you download this table below, print it out, laminate it and display it on your vessel for a quick and easy reference.

These are used where lateral marks would be inappropriate or confusing. They indicate the compass direction of the safest water, so having a compass on board is very useful. They indicate the safe side to pass a danger or a feature, such as a bend in channel or end of a shoal.

What side to pass?

You should pass to the east of an East Cardinal mark, to the south of a South Cardinal, to the west of a West Cardinal and to the north of a North Cardinal. 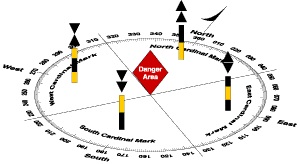 The lights, topmarks and colour schemes have a logic to help you memorise them. The cones on top point in the direction of the black segment of the pillar:

The long extra flash for south, and the continuous flash for north are to avoid confusion if you lose track with your counting.

We advise you download this table below, print it out, laminate it and display it on your vessel for a quick and easy reference. 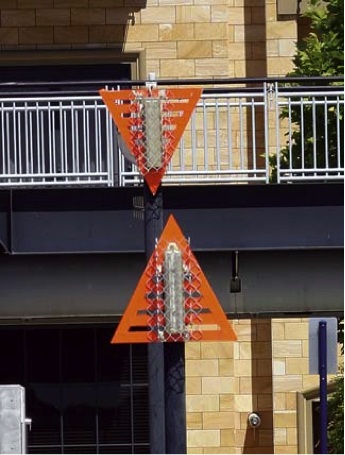 You steer to keep the rear lead directly above the front lead.

If lit, they may use any colour. The chart will have the details.

Sectored lights are navigation aids that indicate a safe channel through shallow or dangerous waters. See the Woodman Point example below.

Generally there are 3 lights of different colours, each identifying a sector of an arc:

It is particularly important to check the chart for the light's meaning, purpose and to determine the extent of the safe passage. 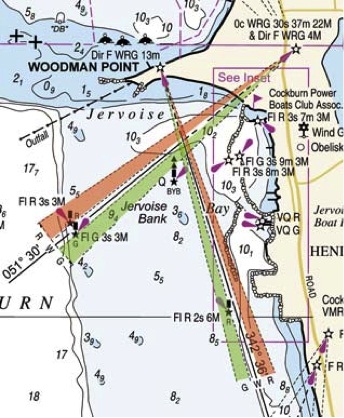 To use the lights in this chart, the vessel is on the recommended course as long as it keeps within the white sector of the light. If the light colour shifts to red or green an adjustment of course is required to bring it back into the white and back on track.

A sticker is available providing information about markers, buoys and beacons.

For a copy of the markers, buoys and beacons quick reference sticker email us or call 13 11 56.

If you see a navigational hazard such as floating debris, an obstructed channel, a partially submerged object or anything that could affect the safety of other vessels you should report it by contacting:

When reporting a hazard please include the position, location and type of hazard.

If you see a navigational hazard you can report it to either the Navigational Safety or the Water Police Co-ordination Centre.

When you are reporting a fault you should include: